Digital India will remain namesake till we do not localize

With India’s population at 1.3 billion and a low penetration level of 34%, there is no doubt on the potential for growth of Internet. 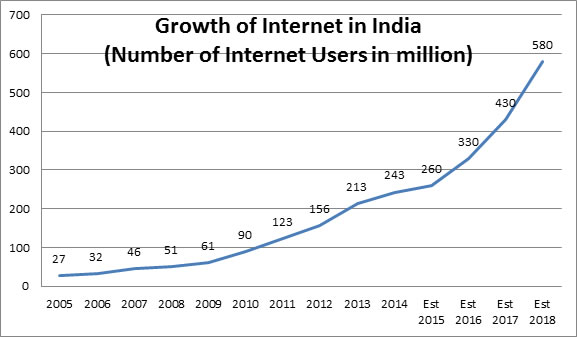 It is estimated that Indian Internet users will jump from 330 million in 2016 to 580 million by the year 2018 due to all round effort by the Government to make India digital. As per report by NASSCOM and Akamai Technologies on ‘The Future of Internet in India’, the growth of Internet will be the fastest with 75% of new users coming from rural area. The fast growth is possible only if content is made available to Indian Internet users in their local language.

Language is the biggest barrier for growth of Internet Users in India.

India is land of diverse cultures and languages. Each state in India is different from the other states in terms of native language spoken, the tradition and culture they follow. While English is known to many Indians, it is not followed in day to day conversation as much as Hindi. English is prevalent now as a ‘show-off language’. It is link language due to diversity of language and Hindi not being accepted as national language. Indians are forced to learn English for commerce and for communicating with different language group. This practice is followed for centuries during the British Era and is still continuing.

But the reality is the demand for web content in all Indian language from majority of Non-English population will drive website localization.

Till we do not localize all digital content in local language and have them available for knowledge, or for information on product and service offering, Digital India will remain namesake for entertainment only.