Shri Narendra Modi, the Prime Minister of India said in one of his speeches 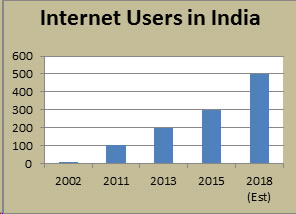 million by end of year 2018. With 6 million users are getting added every month, website localization will become the cost effective solution to penetrate in Indian Market

Key Drivers for Growth of Internet:

By the year 2018, the penetration of Internet will be 40% with 54% of Indians above 25 years of age having access to Internet.

The dream of Digital India is not over till every Indian is adapting Internet for knowledge, trade and commerce. Website Localization in Indian Languages, followed by other Indian languages is possibly the first step as 70% of Indians are not familiar and comfortable with English. Given a choice they will prefer their native language for product and service information as well as for acquiring knowledge and for making purchase decisions

Why Planning for website translation in Hindi will make great sense? Digital India will remain namesake till we do not localize