India is a land of many languages, arts, crafts, performing styles and music. It has assimilated ancient knowledge and uses it in day to day life. Customs and habits are very important to the individual, the family and society as a whole.

Indian Market is not only diverse in many respects but also huge with large community of caste, creed and religion spread across regions. Add to this, the income disparity, rural and urban divide, the challenge to develop a common creative that appeals to all sections across regions becomes extremely difficult.
There are 29 states in India divided on the lines of language spoken. Each State has its official language and dialects. The size and population of many states are such that they will equal or more than equal the size of most countries in Europe.

Consideration of these factors is useful for developing the creative that speaks in customers’ language.

Consider yourself doing advertising for European Market as a whole. What you will do? There will be different approach for each country within the European Union within a common strategy. The campaign will be multi-lingual with localized campaign in the language of majority speakers in each country. Similar is the case for advertising in India because each state in India has its cultural, religious, historical and linguistic identity of its own and they have to be recognized in order to build a seamless connection with the target group.

Does this mean you need the creative for each region within language group should be conceptualised differently with promotional ideas that differ from one another?

Ideally yes. India is divided into 4 different zones based on language groups, customs and traditions to make localized creative.

East Zone comprises of states such as Assam, Union territories in the north eastern region, West Bengal and Orissa. Assamese, Bengali and Oriya apart from English and Hindi 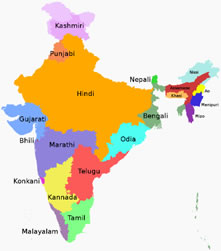 To be effective, English is a must as it has large readership in press and viewership across all states. It cannot be avoided simply because English is the medium of communication for business and it is a link language.

Similarly Hindi is the spoken language in Hindi Belt and a common language easily understood in other states too.

With both English and Hindi, it is possible to cover all states. But advertising to be effective, it is better to be rendered in regional languages due to vast majority of population in towns and villages following their native language for news and information. There are also strong regional newspapers with sole readership and they cannot be reached by other media.

The primary languages that are a must for all India campaign are Hindi, Marathi, Gujarati, Punjabi, Assamese, Bengali, Telugu, Tamil, Kannada and Malayalam

Newspapers have been the most preferred medium of advertising in India since ages. They are still the first platform selected for advertisements by most businesses. Newspapers reach out to about 33 crore readers across the entire country which ensures that for every 3 individuals, there is at least 1 newspaper.

India is a land of films. Every year nearly 800 films get made and released in theatres. There are about 10,000 cinema screens available for advertising in India. About 30% of these screens are multiplex cinemas and remaining are single screens. Cinema advertising in India offer the perfect platform, both on and off-screen to be innovative in conversing with your target.

FM Radio advertising has many advantages such as local targeting, high frequency, multiple exposure and lowest cost per reach.

Digital revolution in India, driven by the 4G rollout, reducing data costs, smart phone penetration and increasing time spent on mobile phones, will ensure that digital ad will also grow at a faster clip compared to traditional media over the next three years.

Whether it is Press, TV, Cinema, Radio, Outdoor or Internet there is tremendous growth due to availability of content in local language. This allows media planners to buy media based on target profile and creative needs with minimum wastage. While we have specialist creative agency and media planners, localization part for translation and implementation is left to advertising agencies production studio. Translators are looked down as vendors who have no say in creative copy.

True localization goes beyond translation. Professional translators with domain knowledge understand the importance of localization and they can be relied upon to transform the creative with local touch. Bhasha Bharati Arts –  the pioneers in supporting advertising agencies for over 40 years has been in the business of developing language campaign in all Indian languages including English to Hindi Translation Services successfully.