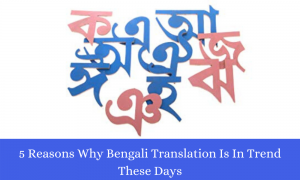 Bengali is an Indo Aryan language and is the national language of Bangladesh. It is one of the 23 official languages of India. It is also the official language of the Indian states of West Bengal, Tripura and in Barak Valley of Assam. The Bengali writing system first appeared in 1778 with Charles Wilkins. It has two literary styles: one is the Sadhubhasa, a refined language, and the other is Chaltibhasa, an everyday language.

Bengali is often known as the second most beautiful language in the world after French because of its charm and sophistication. More than 200 million people speak Bengali. Speakers of Bangladesh, India, Nepal, Saudi Arabia, Singapore, Australia, the UK, and the US also speak Bengali. Bengali is in the sixth position in the world in terms of a number of people who speak it as a first language. Presence of huge Bengali speaking audience helps to channelize the language in promoting business.

 It is written from left to right.
 Bengali is the eighth Most Widely Spoken Language In the World
 The national anthems of India and Bangladesh are both written in Bengali.

Let Us Now Know, What Makes The Bengali Language So Demanding:

Bengali language is being named after West Bengal state and is the official language to communicate. It is the 4th language spoken in the UK and 3rd in Canada. One can notice the banner, promotion, literature books, movies, etc. well adapted to this language. Companies here seek for professional Bengali Translation assistance in India to sell their brand globally and connect with the target audience.

You cannot rely on translation tools, as most of them perform poorly when it comes to Bengali translation. The sentence formation of Bengali is quite complex and so, the machine translation fails here. Therefore, the language needs the expert hand of native Bengali who is well-versed with the culture, tone, and grammar formation of the language to give it an appropriate sense with a touch of sweetness.

3. Bengali is a fast-evolving language:

Currently, Bengali is ranked fifth in the world as mother tongue ranking and is spoken by more than 200 million people around the world, including native and non-native speakers. Besides that, the language is also spoken by the majority of the population of Andaman and Nicobar Islands, Singapore, Maldives, Malaysia, Australia, Japan, UK, USA, and Canada.

Bengali language has gained importance not only in India but also around the globe. It has achieved tremendous status in academics, literature, publishers, marketing and ads, movies, music, sports, and many other sectors. It’s great to see how native people have managed to save the authenticity of this language in today’s age also. With such massive number of Bengali speakers, you will find various opportunities to expand the horizon of your business as well as to give a new voice to your brand in your target language – Bengali.

According to the language report published by British Council in 2015, Bengali is expected to be the third most widely spoken language overseas, after Chinese and Hindi. So, prioritize Bengali language for your business and tap the global market to reach wider audience.

Bhasha Bharati is the most sought after name in the Bengali translation industry, which provides professional Bengali translation services of high quality. They are in the industry from 30 + years having expert Bengali translators to take care of the assigned work in a smooth way. Get your Bengali documents translated by the top marketing translation agency and notice your sales growth rising high.

Translation, Localization, Transcreation: What Is The Difference? Localization Strategy to beat recession in Automobile Industry